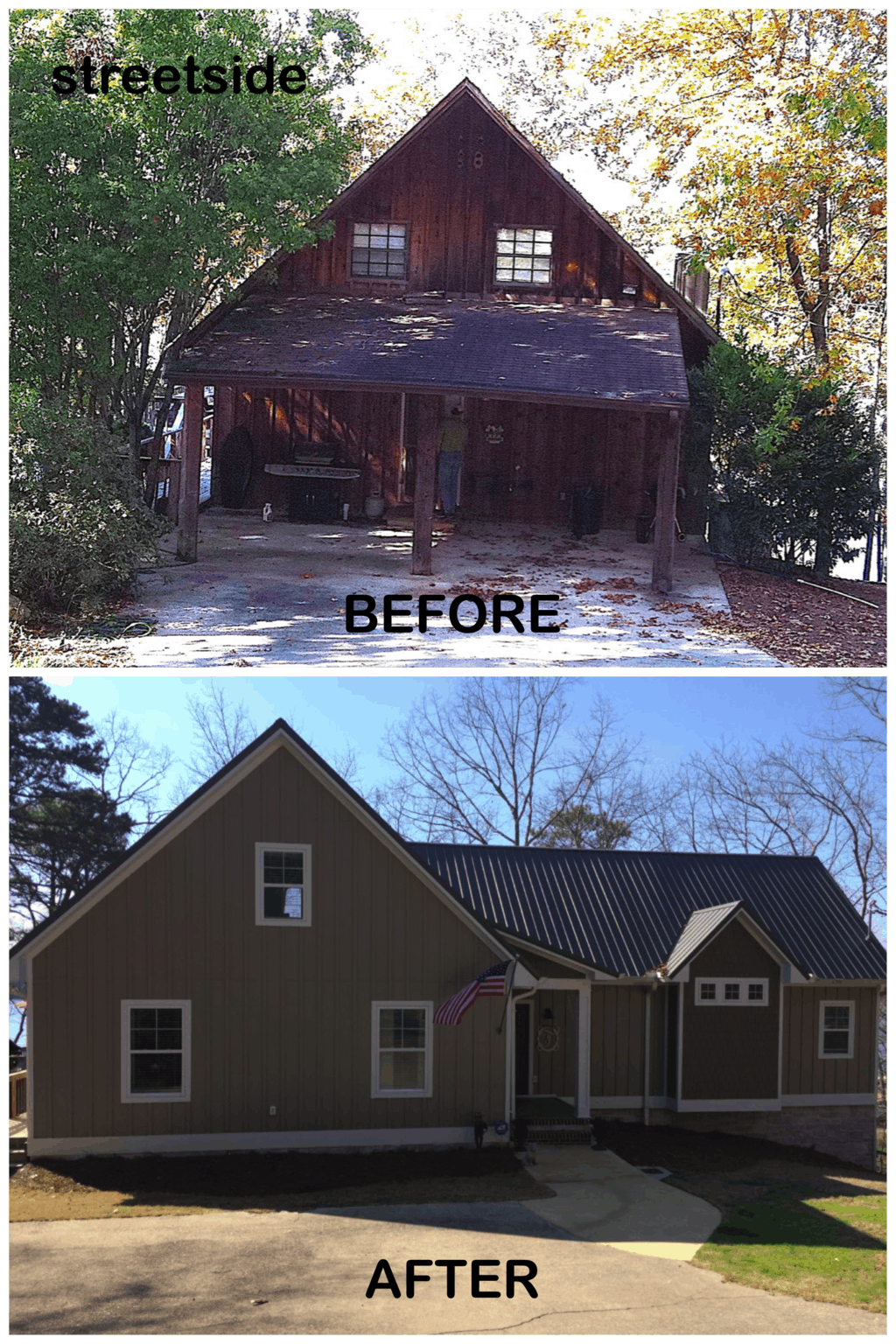 Here is another before and after photo from the corner of the house. Redoing our deck rail is on our future project list! 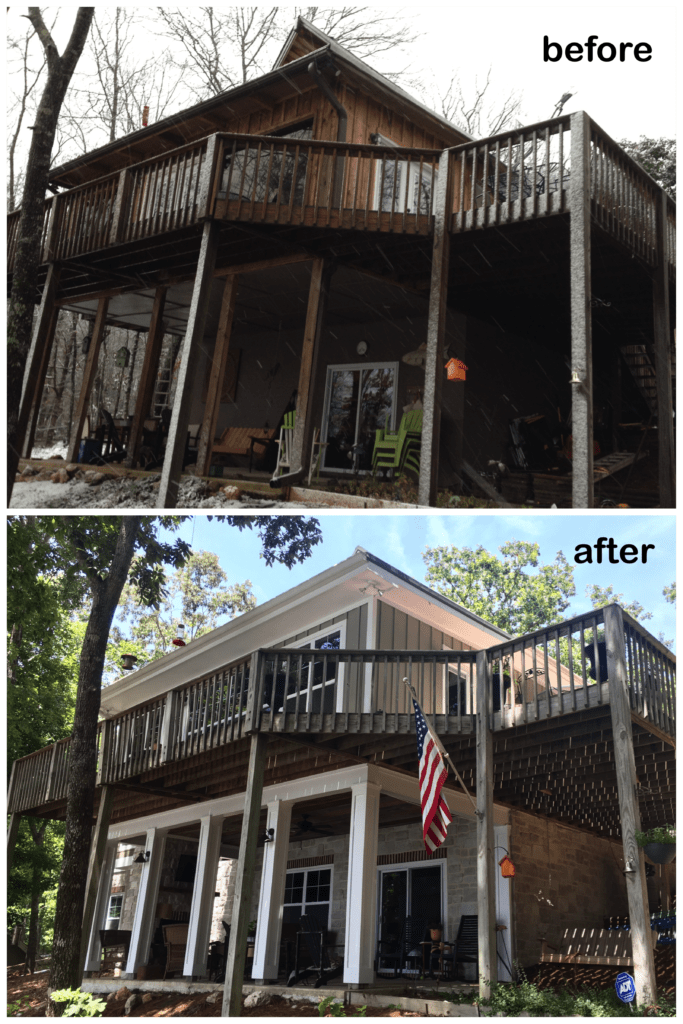 Renovation of the Existing Exterior

So here goes our renovation . . . This is a close-up of the lake side of the house before renovating. Here, you can see the old cedar siding, old windows, and doors. 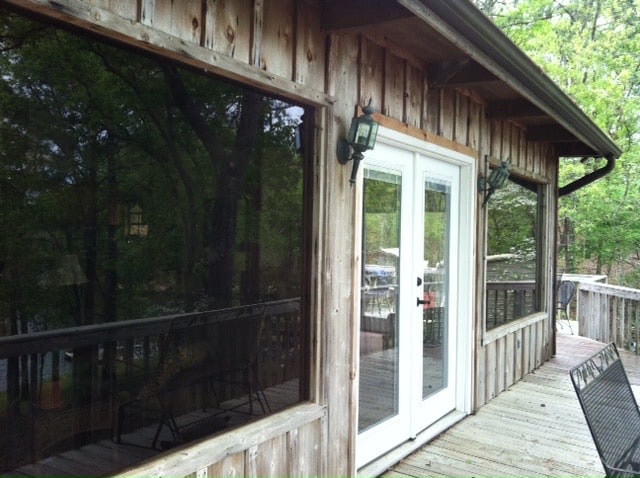 Neal and I actually removed the original carport, which was not actually big enough for a car. We climbed out the second-story window and started ripping off the roof shingles, then the rafters and the cedar columns. This picture is evidence that I helped! I think my goofy stance was because I was trying not to fall off the roof! 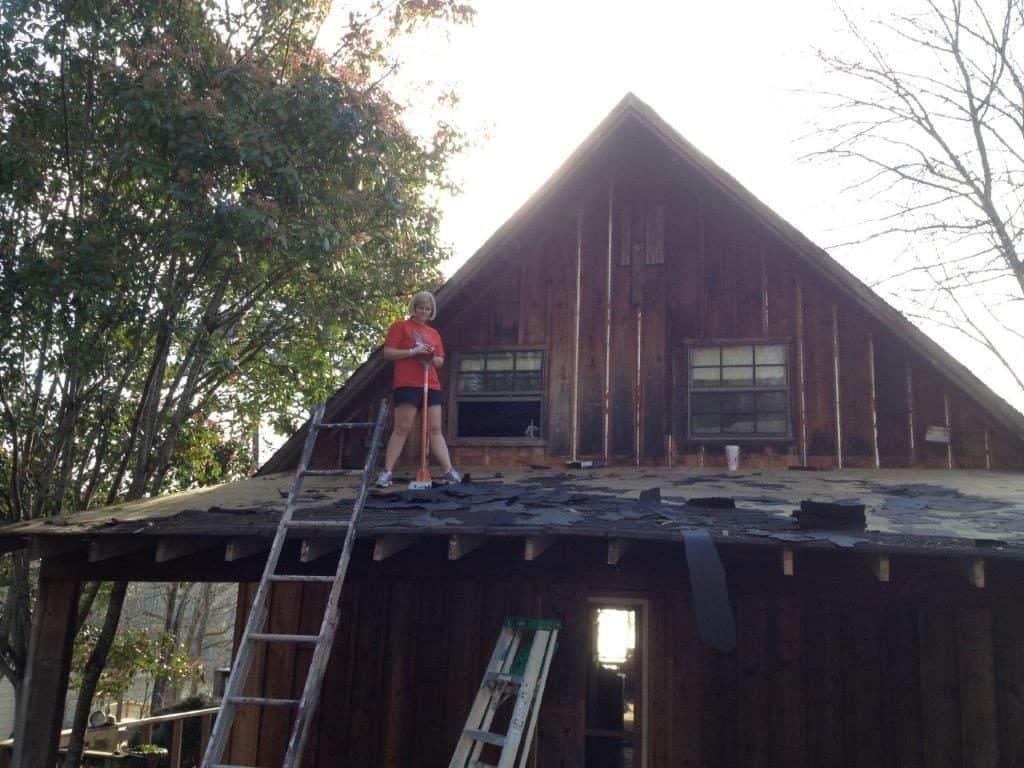 The roof is gone and now we are removing the rafters and old cedar columns. 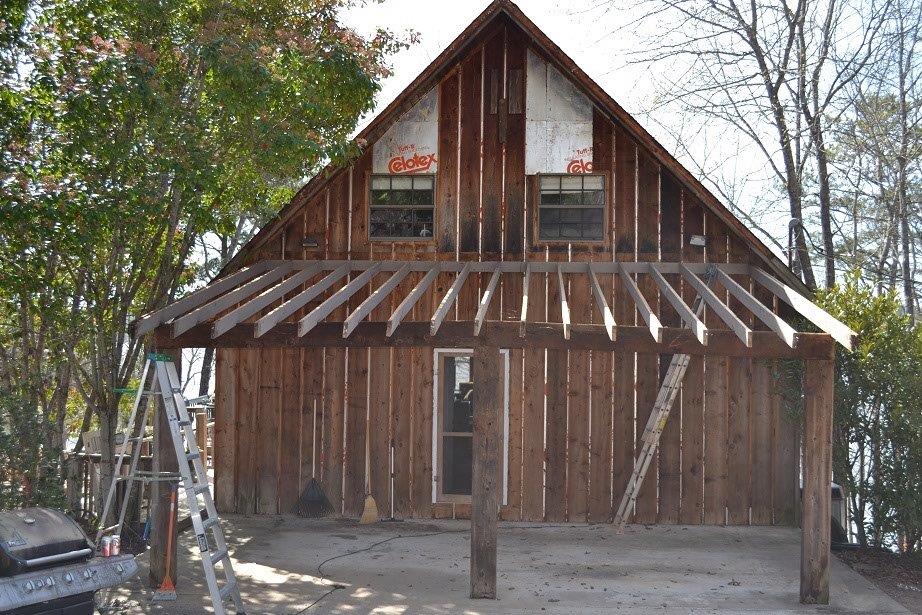 Removing the carport also removed some of the cedar on the house, but we were eventually taking this off too, so no biggie! We saved some of the cedar to use for other projects. This D-handle roofing tool from Home Depot that I am holding in the picture saved us! It really enabled us to get under each shingle and pull out the nails. Because this was our driveway, we also used a magnet on a pole to help us pick up all the nails/screws in the driveway so that we did not puncture our car tires. 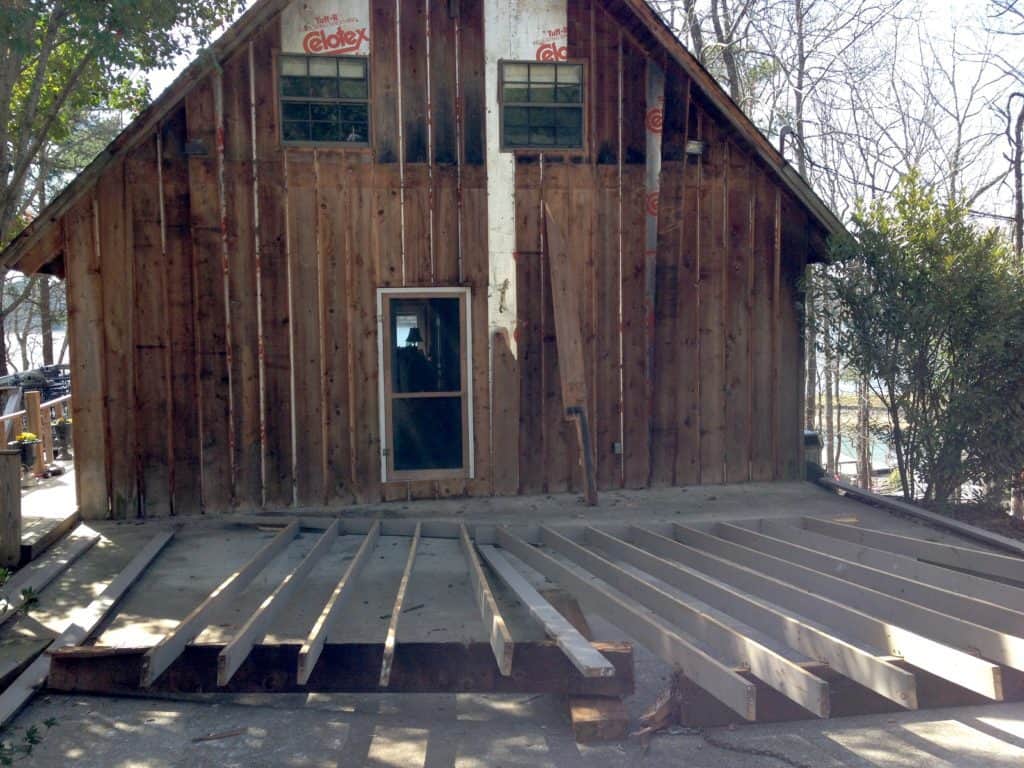 We were living in the house while renovating, so adding these chairs and planters while we were in “transition” was our attempt to “dress it up” temporarily. (We realize this was a pitiful attempt.) 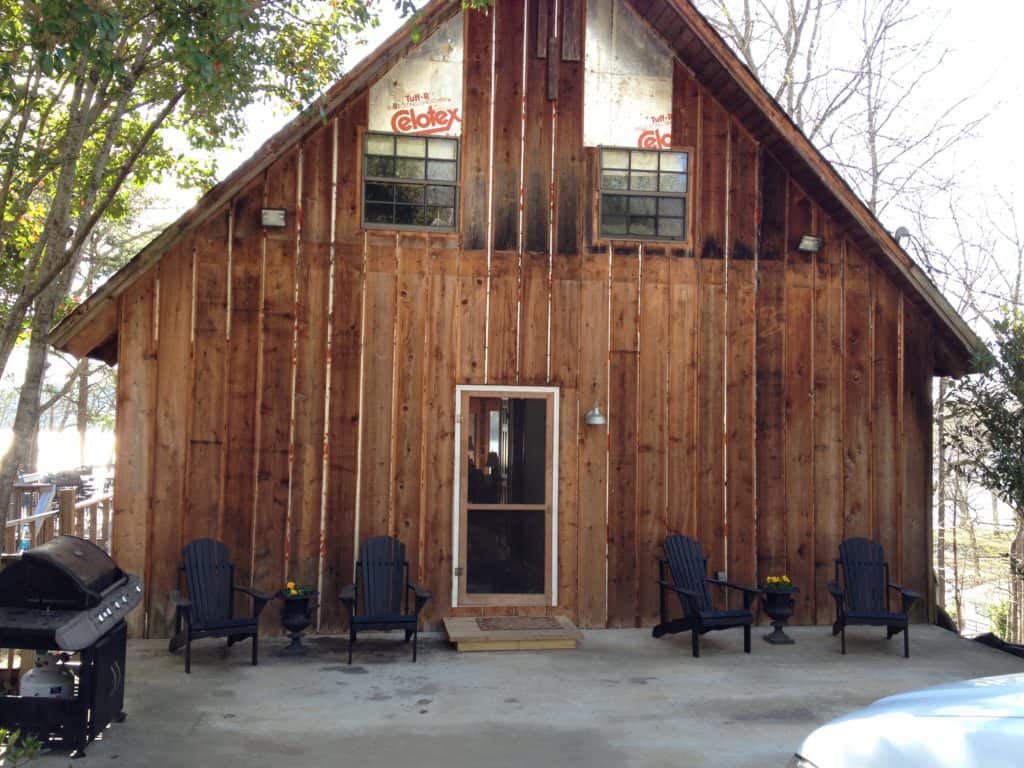 Below, the cedar siding was being removed. (The cinder blocks in the picture below are preparation for the addition on the right of the house.) 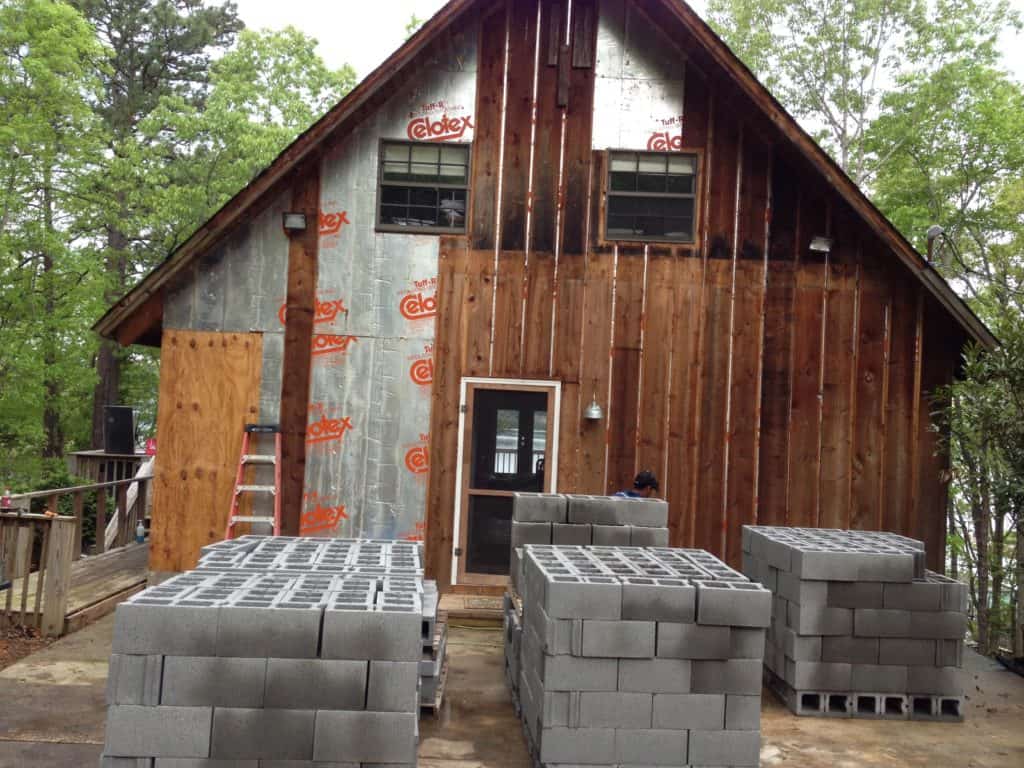 And . . . all the siding has been removed. We kept some of the cedar siding for future projects. 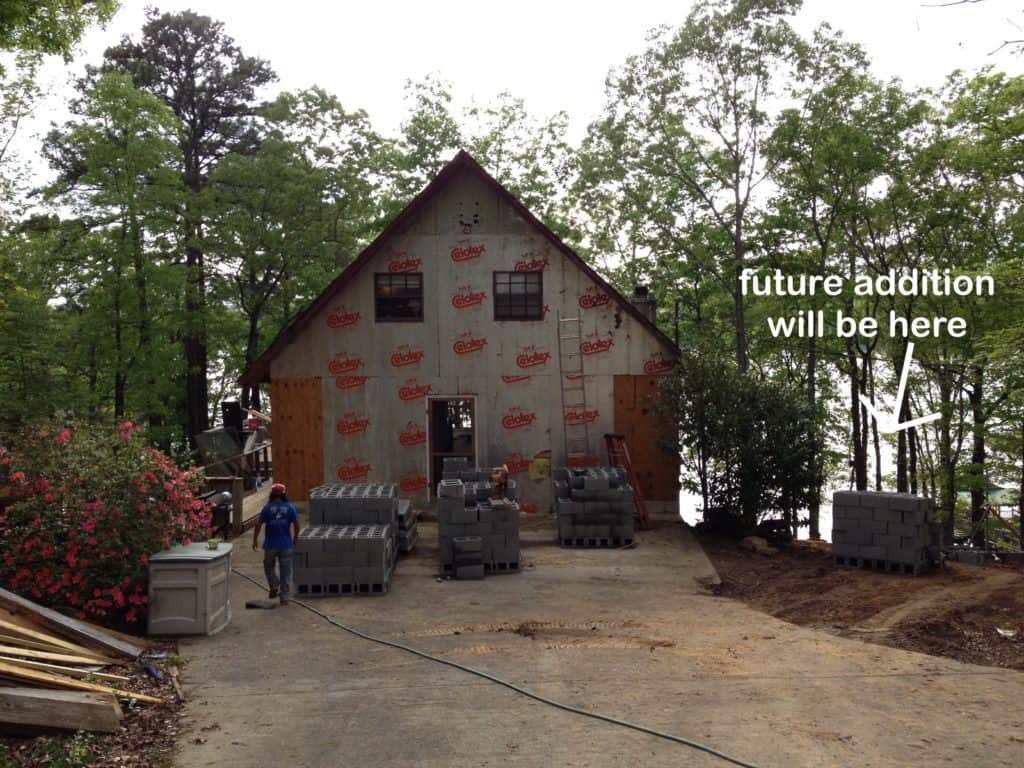 And now this bad boy is stripped down to the bones! (It sort of resembles some scenes in the movie The Money Pit, which we referenced several times during this project. 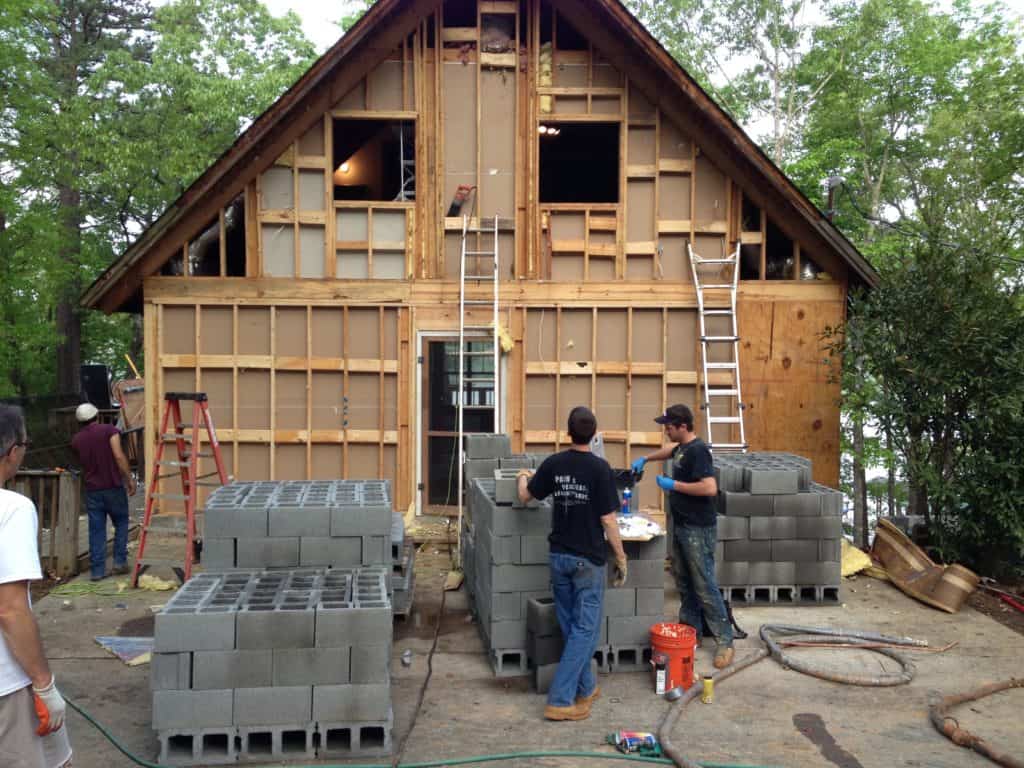 Notice that the two windows on the second floor have been permanently closed; however, we added a new center window. We also added two windows on the first floor. In addition, we added spray insulation to keep us warm and cozy in the winter and cool and comfortable in the summer! We used Jonathan Roll with iFoam to do our insulation and were very pleased. He is a great guy! 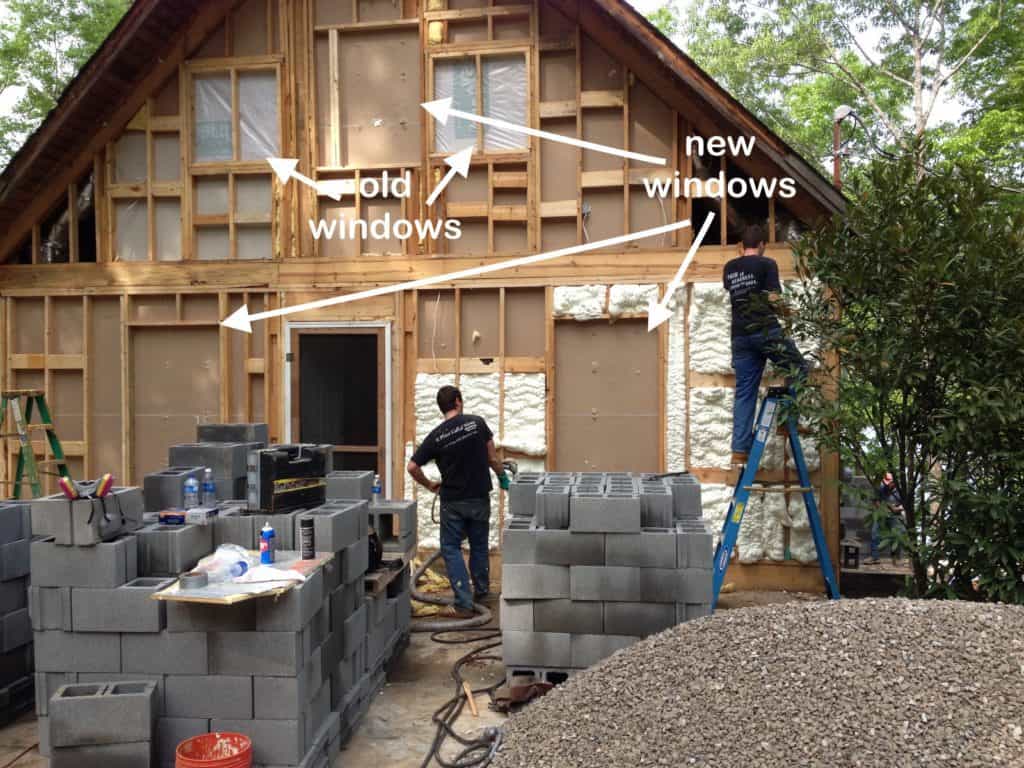 Voila! We installed three new windows! Once the new addition is built (see pictures later in this blog post), the original front door will be closed up. On the interior, removing the former front door will enable us to move the closets in each of the two bedrooms and make both guest bedrooms bigger. More on this part later . . . 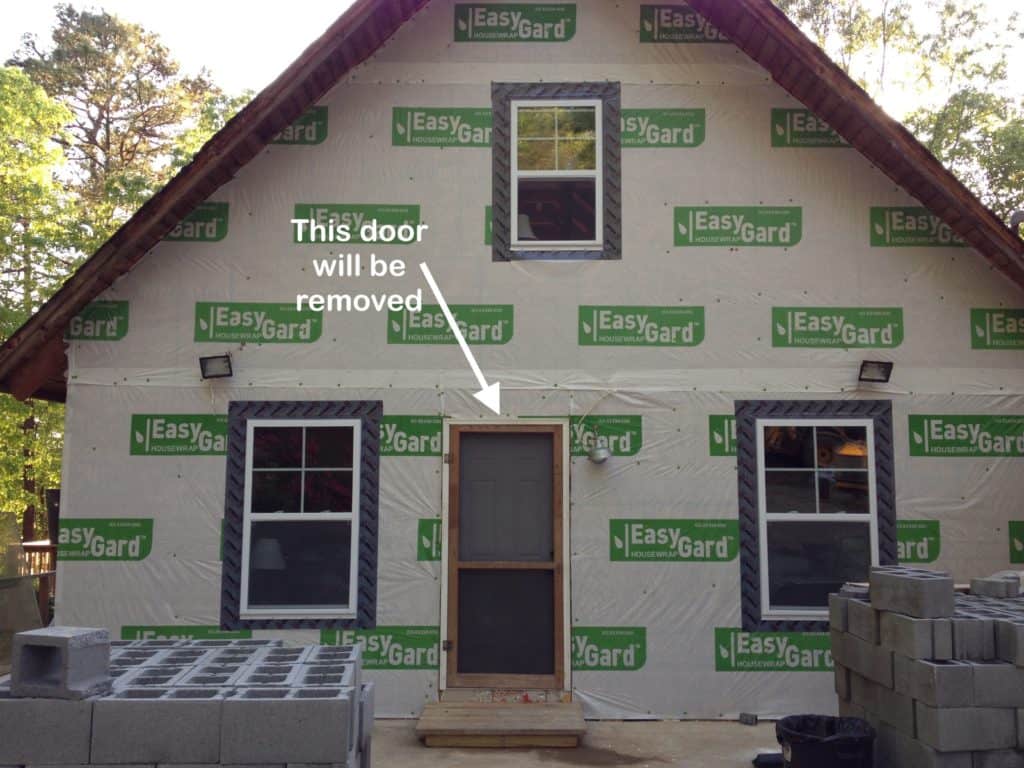 This picture shows the side of the house after the cedar siding was removed. These double windows in the small guest bedroom were removed and a single new window on the street side of this room was added. 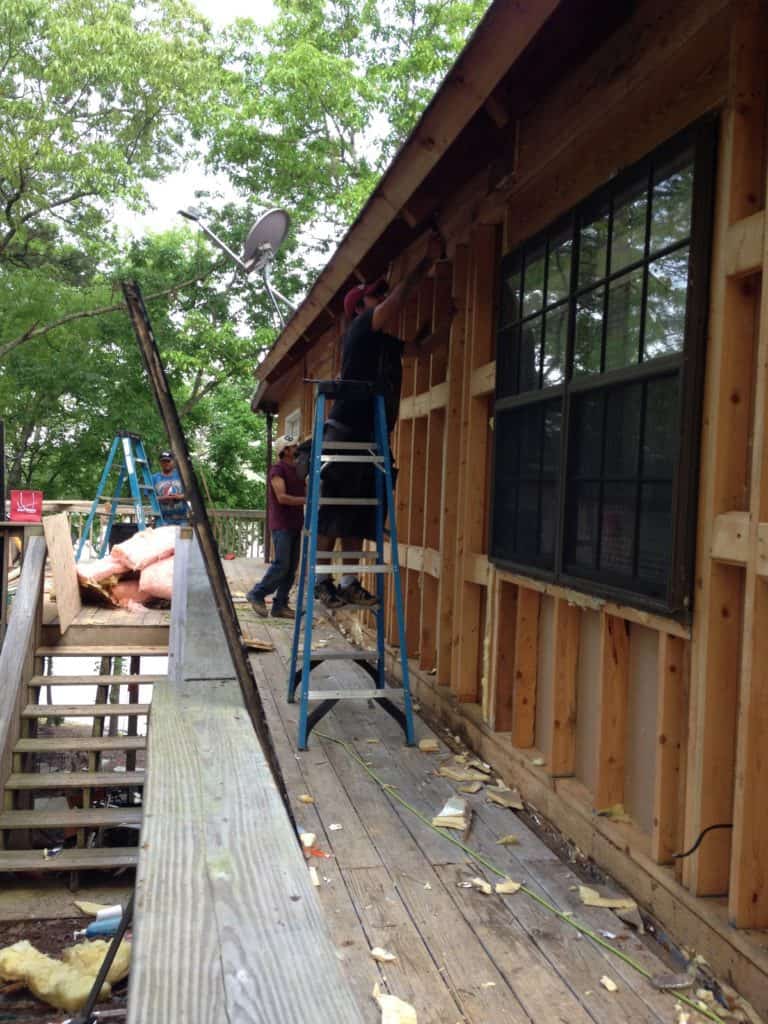 Here is a side view of the house after we removed the siding, closed-up the double windows, and sprayed insulation. 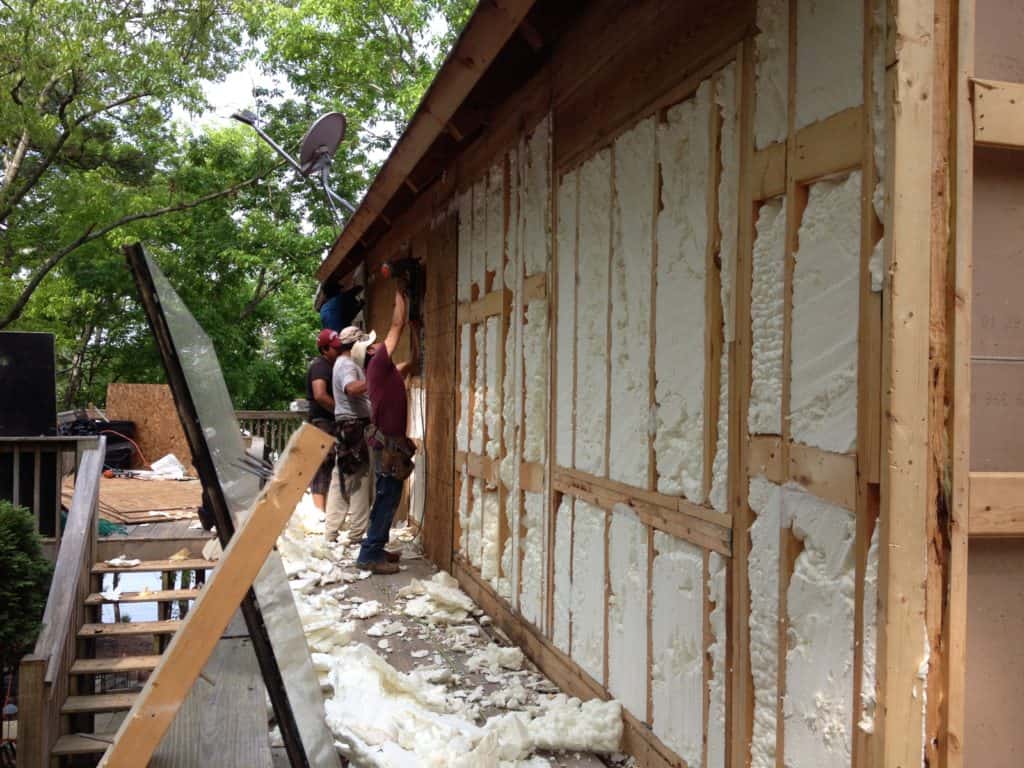 Here is a side view of our house with the old shingle roof and with the Hardie Plank board being installed on the house. 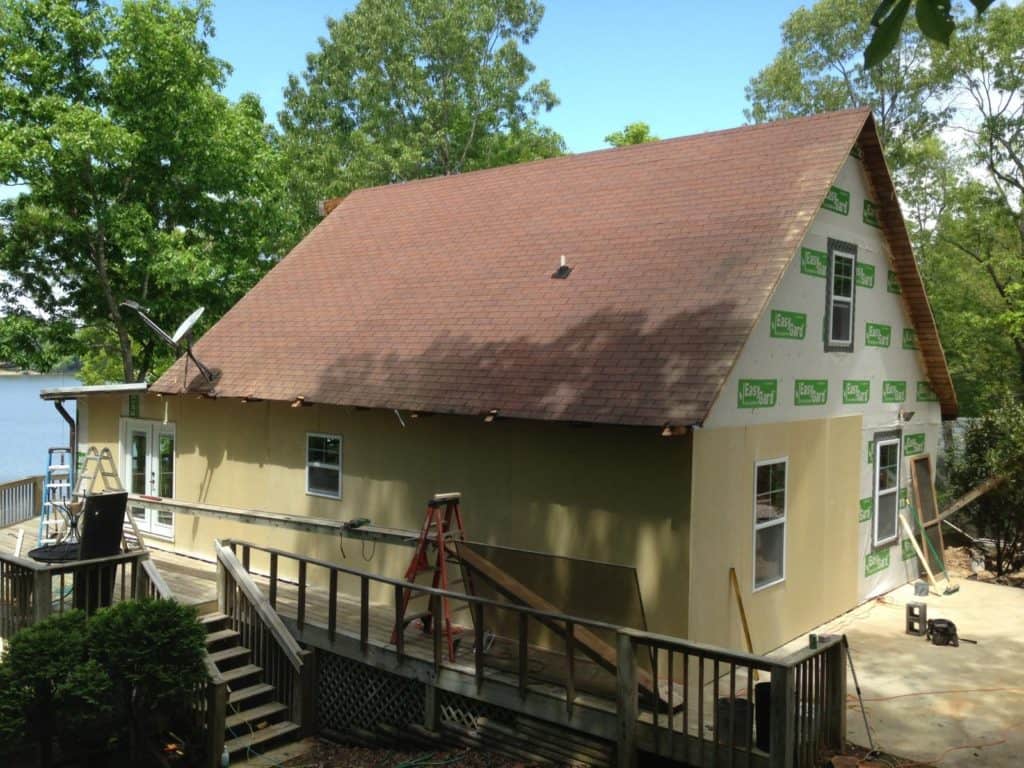 We added strips of wood on top of the existing roof and then used this as a bed for the spray insulation. This picture also shows the board and batten Hardie Plank siding. 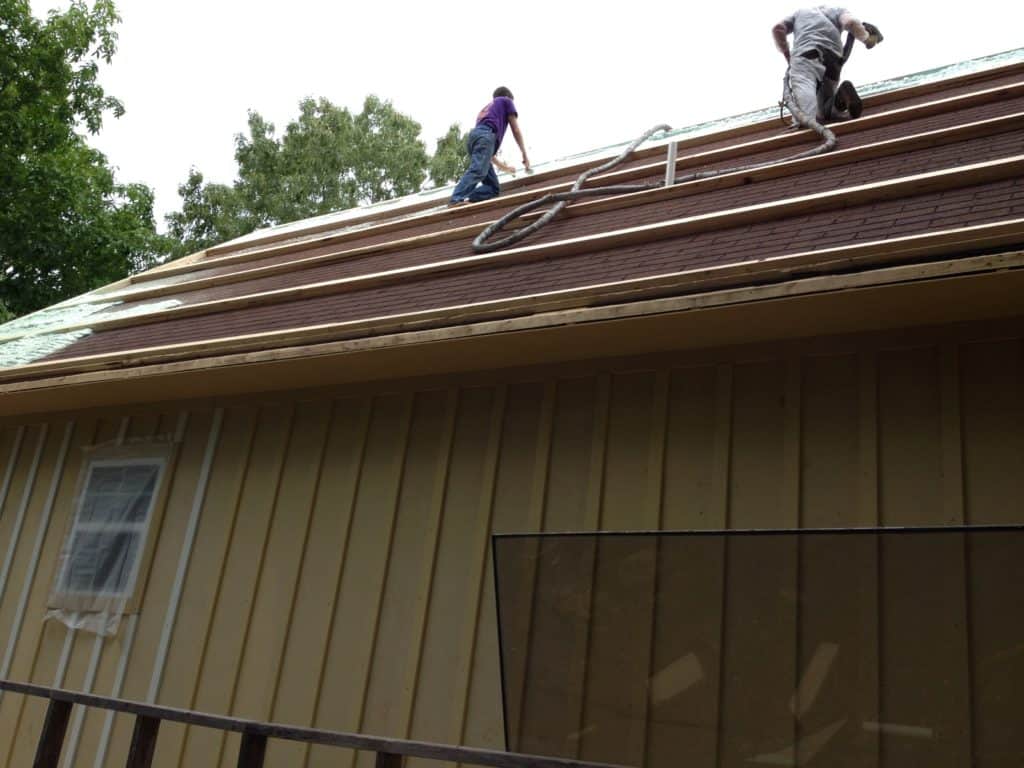 WOW! I just had to share this picture because this dude is BRAVE! Also, notice the dark clouds in the background. This picture shows the foam inside the strips of wood. 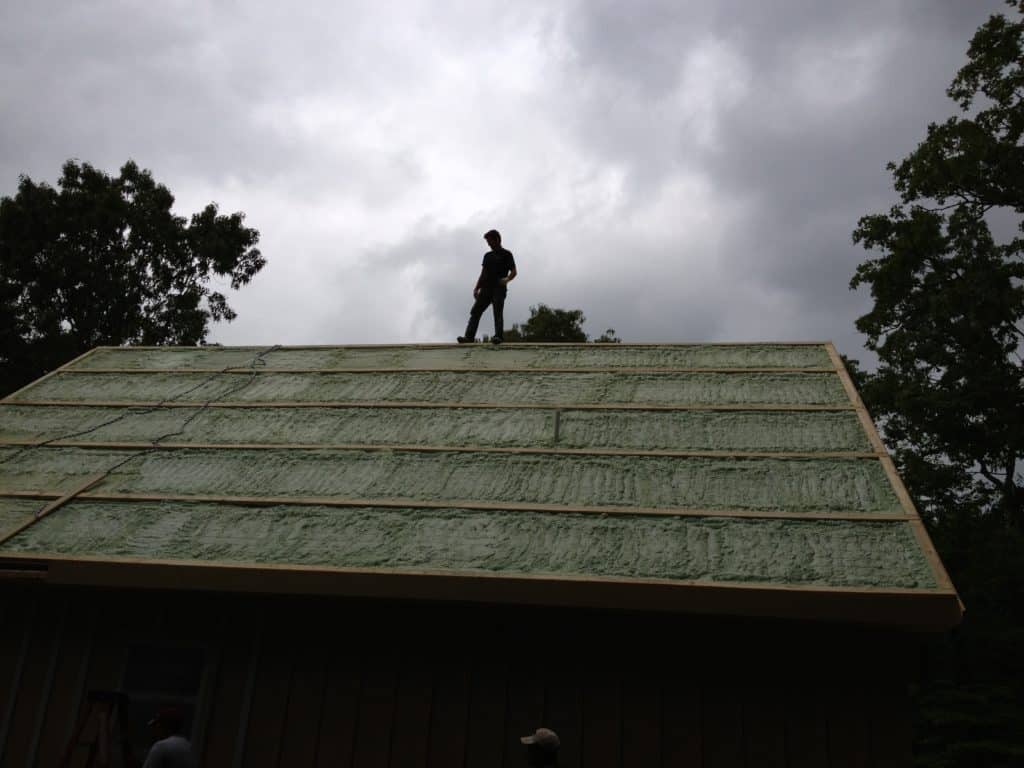 Once the foam was sprayed over the existing shingle roof, the metal roof was installed over this. 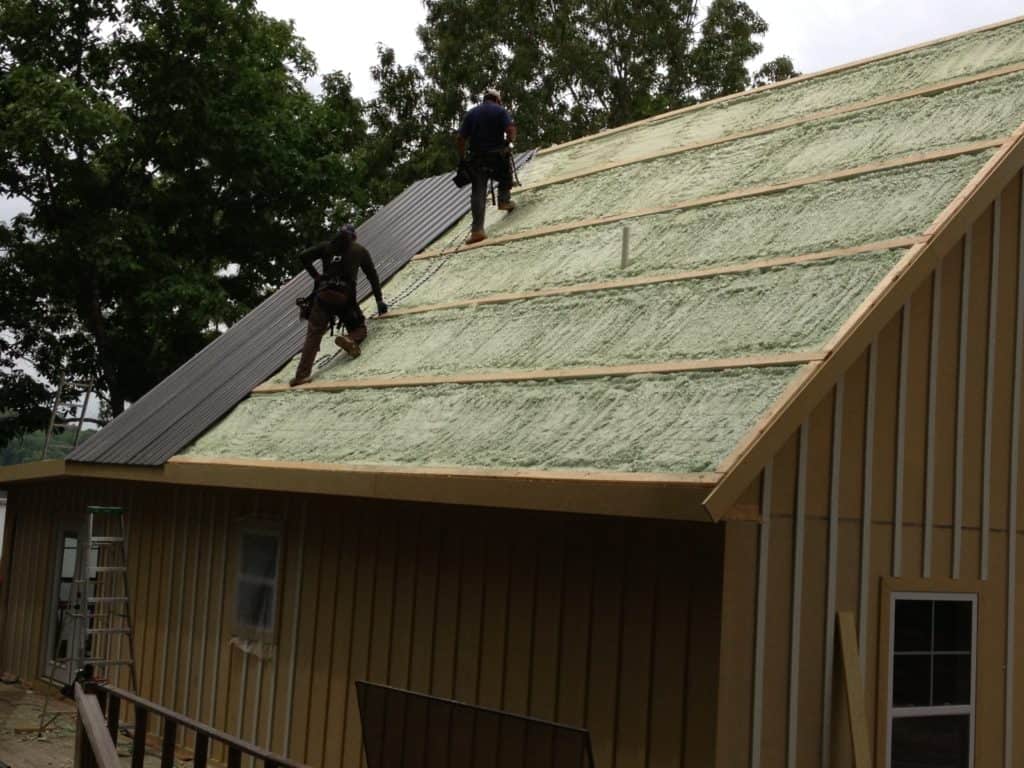 Below are a few pictures after construction:

Click here to see how we updated our patio porch.

One thought on “Renovating the Exterior of Our Lake House”